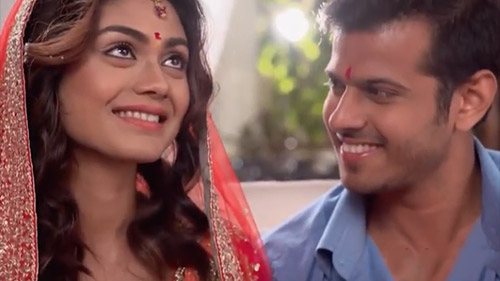 These are the first teasers:


The Pethawala’s live in Agra. The family consists of grandma, her son Mr Pethawala, his wife Ilaichi, their seven children and one grandson.


Ajju tells Sanjana that he’s at the sweet shop owned by the Pethawalas. Sanjana goes there and finds Trilokchand having a heart attack. She takes Trilokchand to the hospital along with Ajju. Ajju informs Ajay.


A furious Ajay rebukes Sanjana for her behavior. On the day of the wedding, Bhushan locks himself up.


The family plays cricket every Sunday. Mishri orders food but forgets to order ‘halwa’ for Ayush. Vinati says she will make ‘halwa’ but Bhushan asks Shreya to make it.


Ilaichi refuses to let anybody watch the cricket match until Bhushan succeeds in persuading Shreya.


Ilaichi expresses her concerns about Shreya and Bhushan to Trilokchand, but he assures her that he would handle the problem. Trilokchand explains to Bhushan that he should try to understand his wife’s likes and dislikes.


After being disqualified from the competition, the Pethawalas return home rejected.


Shreya pours her heart out to her mother, her mother advises her to think practically. On Ilaichi’s advice, Bhushan goes over to Shreya’s house to bring her back home.


Sanjana is waiting outside Ajay’s house late at night. When Ajay tries to step out of the house, he is first intercepted by Mishri then by grandma. When he finally manages to step out, he sees Sanjana running after Browni.


Ajay scolds Sanjana because she tried speaking to Ilaichi. Sanjana tries to explain, but Ajay tells her to stay away.


When everyone leaves for Ayush’s match, Shreya stays back and calls the committee members of Ayush’s boxing club and tells them that he has taken bribe from his opponent.


When everyone leaves for Ayush’s match, Shreya stays back and calls the committee members of Ayush’s boxing club and tells them that he has taken bribe from his opponent.


Shreya calls Bhushan and informs him about grandma’s injury. He rushes home with a doctor. He informs Shreya about the sage he met.


Kammo tells everyone that she has a marriage proposal for Avani and that she is taking her along to meet the suitor.


Sanjana informs Ajay that she would be fasting for family’s sake. Shreya sneaks around at night, making it clear that her injury is fake.

Premiere episodes of Snatched air on Zee World from Mondays to Sundays at 18h00.


As you know from the teasers, Lady Luck ends on Zee World this Wednesday (12 February 2020) and will be replaced by Snatched, a family drama that centres round two brothers from a huge family and their two wives.


One of them loves his wife – until she turns twisted – and the other marries for the love of his bromance.

He’s the second son of the Pethewala family and he’s in love with Shreya.


Before he can tell his family about his feelings for her, they pretend to fix his marriage to someone else, but the bride turns out to be Shreya.


Until they’re married for a while.


The youngest son in the family, who’s best friend Ajju is in love with Sanjana.


And yes, the similarity of their names is ridiculous and annoying.


Ajju gets a job in America and wants to marry Sanjana but can’t because he’s under 21. Plus her father has objections to their marriage.


Ajju wants to stop Sanjana’s father from forcing her to marry someone else while he’s away so he asks Ajay to marry her until he returns from America.


Ajay marries Sanjana and their families don’t know the truth behind their “arrangement.”


The Pethewala family takes time to accept Sanjana… and then Ajay starts to fall for her too, meaning he’s snatching Ajju’s girl.


Meanwhile, Shreya, after being brainwashed by her mother, wants to divide the family house and gain control of it.


Sanjana discovers Shreya’s true colours and tries to expose her. But it’s Shreya who’s exposes the truth behind Ajay’s marriage.

How to Create the Ultimate Beach House

Christian Harder Whether you’re looking for a peaceful spot to escape and recharge or a retreat for hosting friends and family during long weekends and holidays, a beach house is the perfect place to unwind. But while an oceanfront vacation home might seem effortless in its appearance, nailing the perfect mix of style and comfort...

Does the Future of Food Tech Spell the Death of Rural Farms?

Food technology possesses the downside of interfering with natural businesses, such as farming. Indeed, it is revolutionizing the industry, but at a cost. It presents some serious issues to rural America. From Farmers to A.I. Harvesting It is a fact that food technology has offered a set of jobs. A food technology graduate is able...

The fitness industry has changed overnight as Covid-19 forces gyms across the country to close their doors. While gym owners wait for the go-ahead to reopen their businesses to the public, many are moving their classes online through live streaming platforms as a way to generate revenue during the pandemic....

Image by mohamed Hassan from Pixabay  It is natural for most individuals to want to stay at home once they start ageing. They find comfort in the familiar when their health starts deteriorating and mobility is limited. Their homes are filled with precious memories and their neighborhoods with familiar people. However, sometimes looking...

5 Tips to Help You Lead and Experiment During Crisis

As someone who may need to lead during COVID-19 (or any crisis) it can be hard to find your feet and to feel confident in your path. You may feel inadequate, unsure, and out of your depth. That is to be expected. This is leadership like we have never seen...

Read More
Stay up to date
Register now to get updates on promotions and coupons.